This article reviews the array_map, array_walk, and array_filter functions and includes examples to clarify their differences. If you’re already familiar with these functions, feel free to skip to the last section for a quick overview.

PHP array_map, array_walk, and array_filter are higher order functions. These functions take functions as arguments, commonly known as callback functions. If you’re coming from Javascript background, you can understand the significance of the callbacks function in asynchronous programming. 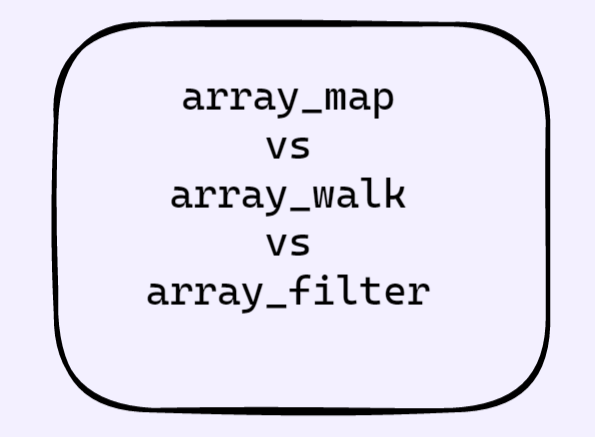 However, PHP uses these callback functions on an array and consequently accesses, transforms, or filters array elements based on the logic of the callback function. Some widely known higher order functions are array_map, array_walk, and array_filter. FuelingPHP has in-depth articles on each of these.

This article aims to analyze these functions and emphasize their differences comparatively. The article includes sections on each of these with relevant examples to give you an idea of how they work and how they differ. So, let’s cut the crap and move on to our first function: PHP array_map.

PHP array_map transforms or maps array elements based on a rule. The callback function plays a vital role in defining the mapping logic. For instance, multiply numeric elements of an array with two.

Let’s include an example that does what the image shows above.

Voila! It takes an array of numbers, multiples them by two, and returns the transformed array. PHP 7.4.0 included support for anonymous functions mainly inspired by Javascript. With arrow functions, the syntax gets even compact.

The arrow functions are compact and could be defined within the function call, making the code much cleaner and compact.

PHP array_walk iterates over an array and, just like the array_map, applies a callback to array elements. However, the callback function in array_walk takes two arguments, a value and a key. So, the function is ideal for applying transforms to an associative array in PHP. Contrary to this, there is no straightforward access to array keys in the array_map.

Notice the & with the value argument in the callback. It implies that the value is passed by reference. Without the &, the change doesn’t reflect in the array.

Here’s an example of array_filter function that filters out negative numbers.

Superb! Works just fine. So, by now array_filter is clear.

This function transforms the array of elements based on the logic defined in the callback.  The callback takes one or more than one argument. Ideally, the count of arguments in the callback and the arrays should match.

This function iterates over an array and applies a callback function to elements. The callback takes two arguments: a value and a key. This function is ideal for associative arrays as it accesses key and value pairs.

This function takes an array and a callback. The callback includes a boolean condition that the function applies to the array values. Based on the outcome, it either retains or filters out the array elements.

These functions can be chained as well. Here’s an example of chaining array_map and array_filter.

The array map multiple the numbers by two and returns the transformed array. Then, the negatives are filtered out by the array_filter.

FuelingPHP has an extensive collection of intuitive and in-depth articles and tutorials about PHP. Check these out for learning more about PHP. How to use associative array keys in PHP array_map function

How to pass additional parameters in array_map PHP function How to use associative array keys in array_map PHP function